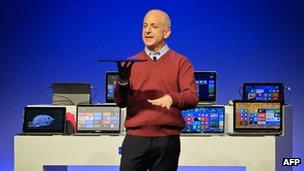 “Foreword by Phil Aldridge – FunctionEight Technical Director. This is not the sort of article I normally blog. It is more tech related than business. However the lack of announcement from Microsoft leaves the door open for much speculation. The fact that he is leaving with immediate effect would indicate he has been let go by Microsoft. On the back of what is a massive turning point in Microsoft’s history with Windows 8 and the Surface launch I can only assume that if this is the case it is because he disagrees with the direction Microsoft is heading. If it turns out he has actually quit then that would lead me to believe he is joining a rival such as Apple, Google, Yahoo etc…… It really does not add up and Microsoft needs to make an announcement quickly to quell the speculation.”

Steven Sinofsky, the head of Microsoft’s Windows division, has left the company with immediate effect.

His departure comes just weeks after Microsoft launched Windows 8, the latest edition of its flagship product, seen as key to the firm’s future.

Microsoft did not give any reason for Mr Sinofsky’s departure.

The company said Julie Larson-Green would be promoted to lead all Windows software and hardware engineering.

“This is shocking news. This is very surprising,” said Brendan Barnicle, an analyst at Pacific Crest Securities.

He added that many observers saw Mr Sinofsky as a potential successor to Steve Ballmer, Microsoft’s chief executive.

Mr Sinofksy’s departure is the latest change at the top of some of the world’s biggest technology companies.

Last month, Apple announced that Scott Forstall, head of its iOS software, and John Browett, head of retail, would be leaving the firm.

Meanwhile, Yahoo – which has been trying to regain some of its lost market share – also hired a new chief operating officer in October.

In July the internet company appointed its third chief executive in a year.

“The pace at which changes are happening in the industry is so intense that companies are struggling to keep up with it,” Manoj Menon of consulting firm Frost & Sullivan told the BBC.

“Business models are changing, competition is coming from unexpected quarters and economic challenges are only getting tougher.

“The changes in leadership are a reflection of these trends and the uncertainties around what will drive future growth and profitability,” he added.

Microsoft’s Mr Ballmer said the changes in leadership were aimed at ensuring the firm continued to be a dominant player in the sector.

“The products and services we have delivered to the market in the past few months mark the launch of a new era at Microsoft,” Mr Ballmer said.

“To continue this success it is imperative that we continue to drive alignment across all Microsoft teams, and have more integrated and rapid development cycles for our offerings.”